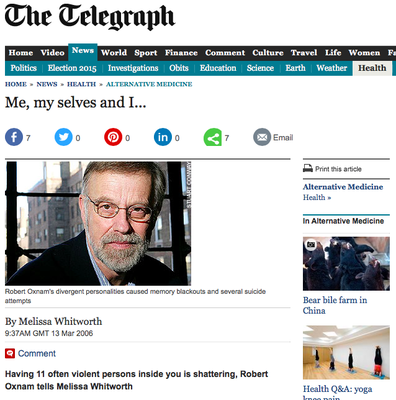 Robert Oxnam knew his life was falling apart, but he wasn't prepared for the bombshell discovery his psychiatrist made one day during a routine session.

Oxnam was not an alcoholic, as previously diagnosed, nor was he suffering from severe depression. He had "multiple personality disorder" (MPD), a condition that means separate, distinct personalities, each with their own memories, ideas, traits and desires, exist within one person. The psychiatrist knew this because he had just had a 30-minute conversation with an extremely angry man inside Oxnam named Tommy. Afterwards, Oxnam had no recollection of the past half-hour and no idea about what had occurred. He blinked suddenly as if waking from a dream.

MPD or disassociate identity disorder (DID), as psychiatrists now call it, is a controversial condition. Some experts in the field even go so far as to discount its existence. While the symptoms do sound implausible, Oxnam's story of his battle with the condition is compelling and, after meeting him, impossible to deny.

"I'm just out in the open," says Oxnam. "Most people with this disorder aren't."
Oxnam owns an apartment next to Central Park in New York that is filled with Chinese paintings and sculptures. On paper he is a formidable figure - a China scholar, university professor and adviser on the Far East to the first President Bush, the investor Warren Buffet and Bill Gates of Microsoft. He was the president of New York's prestigious Asia Society for 11 years. He is also an accomplished sailor and has written two novels.

Those achievements made it even harder to believe the diagnosis in his doctor's office back in 1989, but it seemed to explain a lot. During a course of intense therapy, he and his psychiatrist, Dr Jeffrey Smith, discovered 11 personalities - including the over-achiever, Bob; the workaholic, Robbie; an energetic, but troubled boy, Bobby; an overbearing bully, Tommy; a dark force called the Witch; and the most harrowing character of all, Baby. They all lived within the confines of a castle, with walls, ramparts, a dungeon and a locked library.
 
The characters would clamour inside him, causing headaches, bulimia, memory blackouts and several suicide attempts. Sometimes, Oxnam would wake up covered in bruises and burns with no idea where he had been. As Bobby, he would go skating for hours, while as Tommy, he would fly into rages. His first marriage failed and he resigned from the Asia Society.

None of Oxnam's academic achievements before his diagnosis means as much to him as overcoming MPD, he says. He has written a book, A Fractured Mind: My Life with Multiple Personality Disorder, and now devotes his time to helping others who have the condition.

"It hasn't been an easy transition in our lives from being very private to very public," he says, referring to all his personalities. "We have a disorder that people on the outside looking in think: 'Oh my God, is it real? It sounds scary.' My biggest success is the admission of my failure. To come to grips with that, have the pieces fall apart and put it slowly back together in a different way, that is a success that is never going to get me in Who's Who. You can read my entry in Who's Who and it does not say I survived MPD, but it should."

MPD is caused by severe and usually sustained abuse in early childhood. The brain begins to separate identities and create an interior world where self-preservation throughout the abuse is key.

"In some ways, believe it or not, it is the lucky ones who have MPD," says Oxnam. "We can get therapy and we can find a way out of it. If you are absolutely crushed by the abuse, you are a lost soul. MPD is the answer of a bright child to an impossible situation. You take everything you have and create a world that allows you to escape and allows it to happen to somebody else, in my case, Baby. I had to create the fractured mind in order to deal with the trauma."
Oxnam's book, although a memoir, has a mystery thriller quality. Oxnam doesn't reveal the identity of his abuser, a family member, and vows he never will. "As soon as one gets fixated on the person or persons who did the abuse, they win," he says. "All the attention gets focused on the abuse itself. Acknowledge it happened, face it, but then reframe your life. It is finding out about your own mystery."

The question Oxnam is repeatedly asked is: "How did you achieve so much while being so ill?" "It's the question I never answer well," he says. "When I was fractured in the extreme and we were all in separate rooms, it was possible by having different parts of us locked up paying no attention to anything else. When you are fortunate enough to have a Robbie, a researcher who can work flat out without sleep, and Bob who was completely driven, the combination was almost unbeatable.
"We all have multiple dimensions to ourselves and we can either nurture them or lose them. I nurture them and create a sort of family."
MPD's treatment involves integrating as many of the identities as possible. Oxnam has gone from 11 to three by taking the destructive personalities and gradually morphing them into the most benevolent. "I have a gang of survivors inside me," he says.

There are three survivors now, is that the way it will stay? "I don't know. There have been some interesting developments since the book. Tommy, the scary guy from way back, has re-emerged, but as a kind of guardian figure. It is always evolving.

"MPD is only a disorder until you realise the specialness that you have. In a sense, I would not trade it for the world. If you took us apart, it would be a horribly dull life. With the re-emergence of Tommy, we don't think: 'Oh, horrors,' We see it as another positive ingredient in allowing this curious committee-like structure to really work.

"Will we integrate into one? I don't think there is one of us inside who thinks that's a good idea." A Fractured Mind was published in the United States last October and has received high praise from critics. "In almost all cases, colleagues and friends have given a kind of loving support that I've never experienced before," says Oxnam. "I find that absolutely remarkable."

"Some people have said: 'I've known you all these years and I've never seen multiple personality disorder. How can it be?' The other reaction I have had in a few cases is to disparage the disorder. It is a legacy of the 1990s to say disassociation and recovered memory doesn't exist. I just don't get in the middle of that debate because I'm not a specialist. I am just telling my story.''