Top crime novelist Richard Marinick knows his subject – he gave up his job as a successful policeman for a more lucrative career as an armed robber. Melissa Whitworth meets him 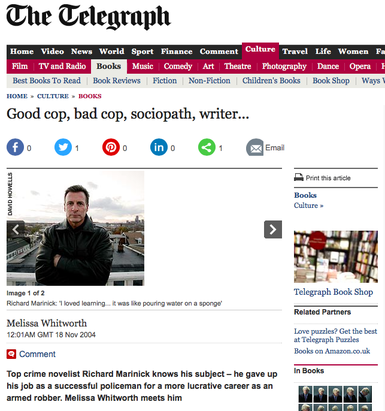 As a key member of north-eastern America's gangland underworld, Marinick masterminded and carried out a number of elaborate heists on armoured trucks carrying sacks of cash between banks, and ruled the gritty streets of "Southie", the local nickname for South Boston.

His final "score", as he calls them, ended with a car chase and a police road-block. He was found guilty of armed robbery and sentenced to 18 years at MCI-Norfolk, a medium-security prison in Massachusetts. His life of violent organised crime had finally caught up with him - and he knew it was time to put his life back on track.

"I thought: 'This is my one chance. I'm going to be a writer'," he says. In jail, Marinick heard about Boston University's Prison Education Program. He enrolled and, after excelling in several creative writing classes, joined the English language degree course.

"Before I was in prison, I used to write, in between scores," says Marinick, 53, when we meet at his home in Boston on a freezing November afternoon.

"I would go down to the beach to write children's stories. As bad as I was, I think I was trying hard to keep myself grounded in some way, so that I wouldn't go totally mad. Writing was a kind of redemption - a way of keeping in touch with my inner child."

It is hard to believe that a man who used to carry a hammer tucked inside the lining of his jacket - to use on his enemies' knees and elbows - harboured ambitions to publish stories for children.

"There's no violence, only joy, in children's books," he says. "They're just about fun."

After gaining his BA in prison, Marinick - with plenty of time on his hands - continued his studies by taking a masters in children's literature. By this point, his writing talent had caught the eye of Harvard English professor and Dickens scholar Monroe Engel, who taught part-time at the prison. Engel became Marinick's mentor and encouraged him to get his work published.

Ten years into his sentence, in 1996, Marinick was released for good behaviour and decided to try to make a go of his writing career. However, he realised that it would be difficult for a former violent criminal to succeed as a sensitive children's author. He knew he wasn't much of a role model.

"Everyone said to me: 'The children's stuff is great, but no one will take you seriously. You have to write about what you know first'."

Boyos, Marinick's first novel, has just been published in America to critical acclaim. Set in Southie, the book is as accurate a portrait of the city's criminal underclass as has ever been written.

He has been hailed in the American press as a successor to Dennis Lehane, author of Mystic River. But, unlike Lehane, he has seen, first-hand - and, in some cases, has committed - many of the crimes he writes about. He tells it like it is. "That is my edge," he says, proudly.

As we talk, Marinick points at the front page of the day's Boston Herald newspaper: "Do you know this guy?" he asks.
The headline reads: "US Attorney Won't Offer Whitey Any Deal For Surrender" and beside it is a grainy picture of Boston's most notorious mafia king, James "Whitey" Bulger.

On the FBI's 10-most-wanted list, he has been on the run since 1995 and is charged with 19 murders, racketeering and extortion.

"I used to do enforcement work for this guy," says Marinick, matter-of-factly. "He would call if he needed us to visit someone who owed him money and we'd just go in and rip the place apart.

"We were called 'the up and comers' - the new wave of gangsters. We were the guys who were going to take over from Bulger 20 years down the road, when he retired or was killed off - or when we killed him."

"They said I was the number one cop in the class," he says, laughing. "I thought I was actually going to go out there and fight crime, but as it turned out, I ended up just fighting drunks."

One night, Marinick was on duty when he was called out to a fatal traffic accident. It was snowing and a lorry had spun out of control. A man driving to work had ploughed into the side of the lorry and the impact had sliced off the top of his head. When Marinick reached the scene, the man was still breathing.

"I wrapped a blanket around him, and his blood was all over me. I looked on the back seat and his lunch was sitting there - his name was written on the bag. I will never forget thinking: 'His wife probably made that lunch for him and he is dying, right now.' It just hit me and I thought: 'What am I doing this for?' "

Disillusioned and depressed, Marinick, who had been earning $150 a week, left the police force and returned to Southie, his old stomping ground, where many of his old friends were making much more money as local "wise guys".

Working out in the municipal gym and bouncing at the local strip clubs, Marinick began to rub shoulders with gangsters, drug dealers, enforcers and hit men. Soon, he started moving up through the ranks.

"You start out low," he says, "maybe making collections for the bigger guys. It's like with Fagin in Oliver Twist. When you start out, people teach you."

At the top of the food chain was Whitey Bulger.

"We thought he was a criminal genius," says Marinick. "This guy was very, very mean. He'd kill you in a heartbeat."
But if the sight of a man killed in a car accident had upset him so much, why did he choose to enter an even more violent world?

"Money," he says. "That's all it was. It was a matter of economics. I am not blaming anyone else for me being a vicious bastard. I made the choices, I knew what I was doing.

"If you are not ferocious, then you are going to get eaten up. It was a very predatory, dog-eat-dog world. If you want to make a name for yourself, you have got to reach a certain level of ferociousness. I was a sociopath. I didn't care. You have to realise, I didn't like myself, I didn't like my life, I didn't like what I'd become - so if I didn't like me, I really wasn't going to care about you."
All that has changed. Years of psychological counselling and an opportunity dramatically to change the course of his life yet again have helped Marinick come to terms with his past.

"I changed because I wanted to. I knew what I needed. I loved learning. I was getting all the s--- out of my mind, all the scales that had built up. It was like pouring water on a dry sponge; the more I learnt, the more I wanted to learn."
As he reaches over to pick a piece of fluff from my jacket, it is impossible to imagine this is a man who once took a hammer to people who got in his way ("I would walk into a club and the bouncer would say: 'Ricky, could you leave your hammer at the door, please?' ").

Marinick is modest about the success of Boyos and is already working on his second book, a private detective novel, as well as a children's story about a rhinoceros. So far, his writing hasn't earnt him the kind of money he once made robbing trucks. So what keeps him from falling back into a life of crime?

Simple, he says. There are too many people he doesn't want to let down - his tutors, his mother and Elaine, his wife of almost two years.

"There were two nuns who were counsellors working in the prison. I would go and talk to them once a week," he says. "They were my angels. These people saw the good in me, and I began to develop that side of me again. I was pushing the dark part of me away and bringing the light out. I tell you, it felt good."