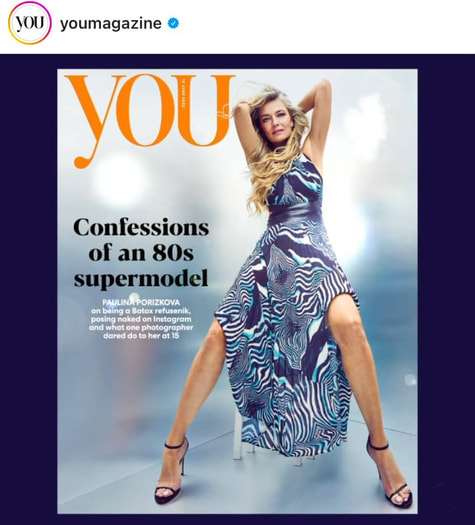 Paulina Porizkova: ‘I will do with my body as I please’ 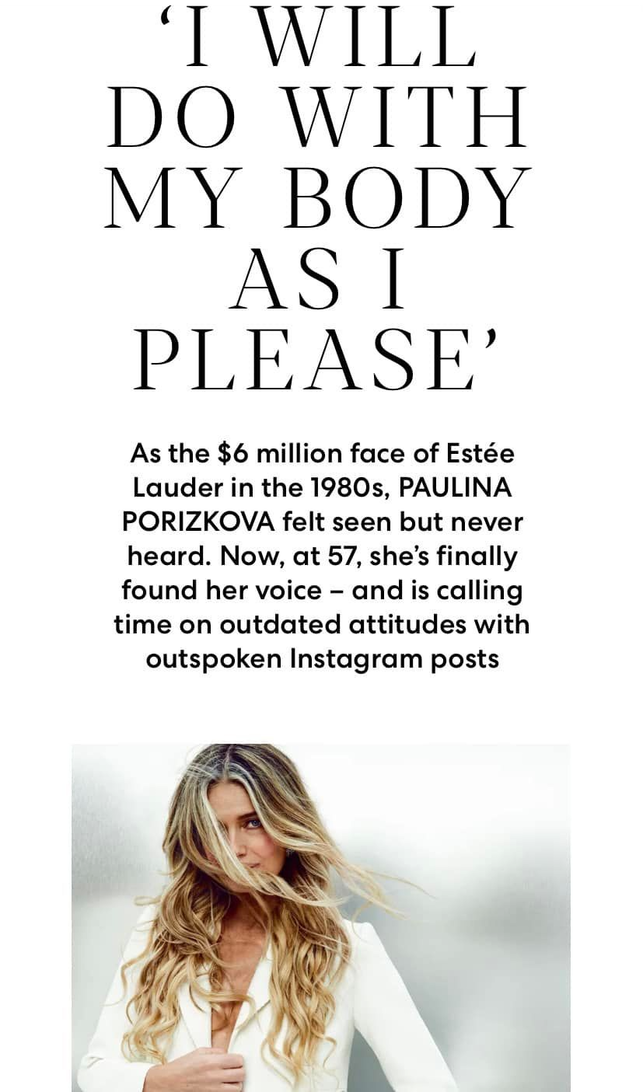 Paulina Porizkova never intended to become an anti-ageism activist, shouting about how women – past a certain age – are ignored by society.

But decades after the model’s career peaked, she is – at 57 – back on the covers of magazines and more outspoken than ever. From the platform of her almost 800k Instagram followers, she has become an accidental pioneer for ‘grey pride’.

‘When I was the most seen, I was the least heard,’ she says of her fame in the 1980s and 90s as a supermodel and wife to rock star Ric Ocasek, songwriter and singer with The Cars, who was 21 years her senior. When we meet in a café in Manhattan’s Chelsea, she has just returned from shooting a new Karen Millen campaign in London and is jetlagged, as successful models perpetually are. But much has changed since her early years.

​​Porizkova’s online presence today has become a personal intervention, calling out an industry that had no problem exploiting her when she was 15, but then ignored her until very recently. ‘As a human being, you’re probably better off being heard than being seen,’ she says. ‘And that managed to escape me for a really long time.’

Discovered aged 13, she was living and working in Paris by 15, and on the cover of Sports Illustrated at 18 –a huge moment in the American modelling and pop-culture world. In 1988, she signed a $6 million deal with Estée Lauder, then the highest-paying modelling contract in history. She graced 21 Vogue covers and was regularly voted one of the most beautiful women in the world. She appeared in pop videos– she met Ocasek starring in the video for ‘Drive’ – and acted in dozens of films and TV shows, including Female Perversions with Tilda Swinton.

​Porizkova says she started to feel invisible in society around the same time her husband seemed to lose interest in her. ‘I kept trying to rekindle his interest for many years, and then I gave up,’ she says. ‘I remember on my 50th birthday, thinking, “OK, so my husband doesn’t seem to desire me. I have zero career and I am invisible in the world. What do I do now?” I wasn’t qualified for anything but wearing clothes and dismissing horny men. I’d stopped working while my kids were little.’ (Her two sons with Ocasek, Jonathan and Oliver, are now 28 and 24.)

​​When the couple separated in 2018 it was amicable – or so she thought. ‘We were going to put the house on the market. We decided together that there’s no point in getting divorced until we knew we had sold the house and then we could divide the assets,’ she says. ‘So we were still living together, still had nightly dinners. Nothing had really changed.’
But before the divorce was finalised, Ocasek died of heart failure at the family home in 2019. After 30 years of marriage and shared finances, Porizkova discovered after his death that he had written her out of his will, along with his two sons from his first marriage. He was, she believes, influenced by poor legal advice. Under New York law, she was able to settle with Ocasek’s estate and received what was due to her as his legal partner of three decades. Writing about it in 2020, Porizkova told of the emotional toll of having such a long marriage end in betrayal. ‘While my love for my husband was steady and my trust in him absolute, I was clearly delusional. I believed I knew him. I believed we had the same definition of “love”. Grieving him is an equal amount of heartbreak and rage.’

Born in Czechoslovakia, as a child Porizkova had already experienced powerlessness and abandonment. Her parents had been anti-Soviet dissidents and fled Russian occupation, leaving Porizkova, aged three, with her maternal grandmother. When her mother returned for their daughter three years later, pregnant with her second child, Jáchym, she was placed under house arrest. Porizkova, her mother and brother were finally able to move to Sweden in, 1973 but by then her father had met the woman who would become his second wife.

Porizkova spent years in therapy and has come to peace with her parents’ decisions. Of her mother she has said, ‘even though we’ve had a very complicated relationship, what inspires me most about her was her bravery in saying “I’m sorry.”’

Those early experiences did seem to influence her choice of husband, though. She says that when she met Ocasek, ‘he was 40, I was 19 –I went for the father figure, clearly. But I thought, “Somebody loves me, woohoo! Fantastic.”’ Ocasek had four sons from two former marriages when they met. ‘To me, that was the greatest gift you could possibly give me. I adore my stepsons and their families.’

She now lives in an apartment on a leafy street in Manhattan and has a house in rural upstate New York, which she co-owns with her two sons. ‘It’s a rambling, slightly decrepit house, where the plumbing doesn’t work,’ she says. ‘If someone said, “I’m going to go to a supermodel’s country estate” they would be shocked. It’s primitive living at best. I love it!’
​There, she regularly hosts friends and family – this weekend 25 relatives will celebrate her younger son’s birthday. ‘[My boys] are gorgeous, kind-hearted, empathetic… just wonderful. I’m so proud of them, even though I don’t feel like it’s necessarily my accomplishment– a large part of that is DNA– but I do think that my husband and I did a good job raising them.’ Jonathan is a video game designer; Oliver is a computer analyst.

At a family dinner recently, everyone had to go around the table and say one thing they loved about the other. ‘My elder son said, “My mother is the most capable woman I know.” That just hit me so strong,’ she says. ‘Because I thought, “Oh, he knows. He’s seen everything I do.”’

On social media Porizkova posts intensely honest portraits of betrayal, grief, heartbreak, anxiety, depression and, yes, ageing. Often her posts show her with no make-up, no filters and definitely no Botox. Recently, over dinner, a photographer friend kept saying to her: ‘Stop doing that, whatever you’re doing with your face, stop.’

‘I was like, “I’m listening to you and frowning. You’re telling me that I should stop frowning?” I was emoting, which was weird to him because he was not used to a woman my age actually having full possession of all her facial muscles. And I think that’s f***ing creepy.’
Dating has been a disaster, she says. The men on the market, no matter their own age, are looking for 20-year-olds. ‘This could be said about my husband,’ she says. ‘Now when I see a man in his 60s going out with a 30- or 40-year-old, that tells me all I need to know.’

She briefly dated Aaron Sorkin, the prolific screenwriter and director, last year. On their break-up she says, ‘As unfiltered as I usually am, this involves someone else’s privacy – so this is all I’ll ever say on the subject.’ But he helped heal her, she says.

She is now on Raya, the dating app for famous people in creative industries. ‘Quite frankly,I don’t care about looks,’ she says. ‘I’m attracted to talent. Yes, intellect is sexy, but creativity gets me. I’m into writers. I really should stop being into writers because it hasn’t been good for me.

‘I would say absolutely no more rock stars and no actors. There’s too much narcissism. But I’m old enough to know there are always exceptions. I have met some nice, sweet men who were so intimidated by me that they either couldn’t speak or they ended up just talking about themselves the entire time.’

Last year, Porizkova bared all in a sheer bodysuit on the cover of Vogue Czechoslovakia (40 years after her first Vogue cover) and the images went viral. She has so much to say about the issue of female representation that she has written a book of essays called No Filter: The Good, the Bad and the Beautiful, to be published in November. In the book she won’t be naming names, she says. ‘That is not my book. It’s not a tell-all. This is about my emotional life and my view on things.’

As a supermodel she has experienced a kind of double erasure in her life. When a young model she was only ever treated like an object: ‘I was an apple in a still life. I came in to work, freshly showered with clean hair, and then somebody polished me and put me in a basket. Who you are or what you think is of absolutely no consequence.’
When she signed her Estée Lauder contract, ‘that erased my voice altogether’, she says. ‘Because I had to conform to a large, important company that paid me a lot of money. And I had to become the Estée Lauder woman. In my spare time I smoked, swore like a truck driver, I was into punk – meanwhile, at work and in my public life, I was supposed to be the lady who shops at Saks, which was very far from who I actually was.

‘The amount of times that I was asked by a man to meet him and was greeted either naked or with him in an open bathrobe… I mean, I couldn’t possibly count them.’

When Porizkova was 15, as she was having her make-up done on set, the photographer for the shoot came and put his penis on her shoulder. ‘I had literally never seen a penis before, and I had no idea what it was. It was meant to be funny. Being 15, I just incorporated it into my life as, “Oh, well, that’s a normal thing. That’s like an everyday thing.” Here’s what’s sad: when you are introduced to this when you are a child, and you don’t think it’s gross and you don’t think it’s wrong. This is what you think life is. And this didn’t hit me until later.’

These days it’s predominantly Porizkova’s Instagram profile giving her the voice she never enjoyed as a young model. ‘It is the first time I have the opportunity to be unfiltered,’ she says. ‘There’s no middle man. I own my own image.’ She receives negative comments for posting pictures of herself either nude or in a bikini. One man told her, ‘You must be in so much pain to keep posting bikini pictures at your age. I’ve always thought that getting old and ugly is hardest on the pretty people. The fall from grace is so much farther when you were beautiful.’ Another had objections about the way her neck looked in a post.

‘The problem, I have realised, is that menopausal women who are sexy are seen as advertising false wares. We cannot be sensual because we are no longer fertile. And we are more empowered, more intimidating and more sexy, because we know what we want – and that intimidates the sh** out of men.

‘If I choose to show my body and if I control the way my body is seen, does that mean that I then have the power? Yes. This is my body. And I will do with it as I please.’