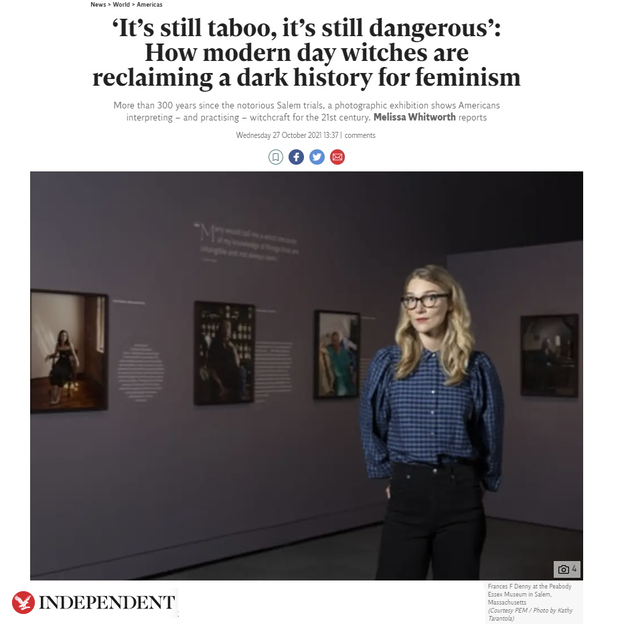 More than 300 years since the notorious Salem trials, a photographic exhibition shows Americans interpreting – and practising – witchcraft for the 21st century. Melissa Whitworth reports
At a recent women’s march protesting Texas’s near total abortion ban, a protester held aloft a sign that read, in furious red letters: “We are great granddaughters of the witches you didn’t burn.”

Other messages referencing witch-hunts, and ancestral witches, have appeared at rallies across America as part of the post #metoo protests against a perceived war on women’s rights.

“It’s not a coincidence that there’s been a huge rise in the resurgence of interest in witchcraft among young people, at the same time as the resurgence in feminism,” says Frances F Denny, a photographer, whose book Major Arcana: Portraits of Witches in America was published in 2020, is the subject of a current exhibit at Peabody Essex Museum in Salem, Massachusetts, the town of the 1692 witch trials.

“If you look at the history of feminism in the 1960s and 1970s and the history of modern witchcraft, they’re moving in tandem. The waves are happening at the same time.”

While researching her first book in 2014, Denny discovered that one of her ancestors had been a judge during the Salem witch trials. The trials marked one of the darkest, and still pored-over periods of life in the settler colonies. Puritan panic in Massachusetts, fuelled by a year of bleak conditions – a smallpox outbreak, a brutally cold winter and local political instability – led to the accusation of witchcraft against 200 people, followed by the execution of 20 of them: 14 women and six men. 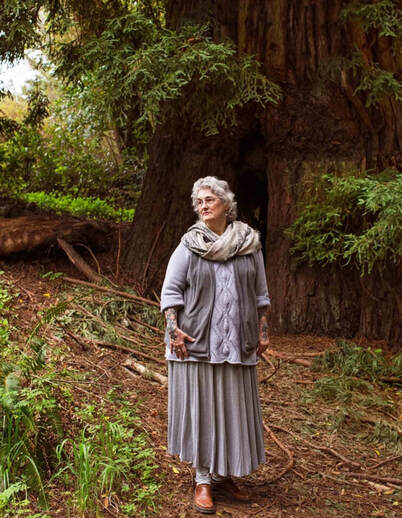 Frances F Denny. M. Nightmare, (San Geronimo, California), 2016, from Major Arcana: Portraits of Witches in America series, archival pigment print (Courtesy of the artist and ClampArt, New York, N.Y.)
One of the accused, Mary Bliss Parsons, was also a relative of Denny. While Parsons was found not guilty, the accusation of witchcraft shadowed the rest of her life. Denny’s family discovery led her on a journey across America from New York, to San Francisco, to Maine to New Orleans, against the backdrop of New England witch hysteria, photographing 75 modern-day witches, aged 20 to 85. Her odyssey took three years to complete.

The portraits, a diverse, eclectic photographic coven, now form part of the finale in a three-part exhibition in Salem – “back where I belong,” Denny says – at the Peabody Essex Museum. Alongside relics from the 17th century trials, is a dress by designer Alexander McQueen – made in 2007 to honour his own executed Salem ancestor, Elizabeth How. The museum houses original documents from the period, displayed in the first part of the exhibit entitled “No one was safe”; arrest warrants and testimony of Salem villagers under interrogation and letters both against and in support of the accused. Elizabeth How’s testimony, on display, replies to the accusations of cursing villagers and livestock: “If it was the last moment I was to live, God knows I am innocent of any[ ]thing in this nature… You would not have me confess that which I know not. ”

The events were immortalised in Arthur Miller’s 1953 play The Crucible. The museum also holds the letters reversing all charges in 1711 and ordering payments of damages to a list of the executed.

Several studies, one conducted by the Pew Research Center in 2014, suggest now that formal identification with witchcraft is rising steeply in the US, with close to one-and-a half million practicing witches. The Christian Post reported in 2018 that Wiccans, one of the larger sects within witchcraft, outnumbered Presbyterians. The ways in which witchcraft is being practised are as diverse as America itself: “You have Wiccan high priestesses. You have voodoo practitioners. You have kitchen witches, green witches, hedge witches, sex witches, space witches, and all of them are interpreting this idea of witchcraft and magic in an individualised way,” says Denny. 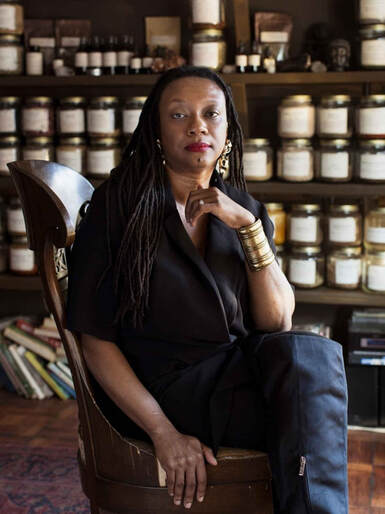 Pam Grossman is one of the most prominent witches in America currently. She is the author of two books, Waking the Witch: Reflections on Women, Magic and Power (2019) and Witchcraft. The Library of Esoterica, published later this month, and the host of the podcast, The Witch Wave. She appears as a subject in Major Arcana, and writing in the book’s introduction, says: “The image of the witch is one of the earliest examples of widespread propaganda against women.”

“[Some] told me that they had their identity as a witch used by ex-spouses against them in divorce and family court proceedings,” says Denny. “That was a real wake-up call for me to realise that there’s still a lot at stake with this project, with this word. It’s still taboo. It’s still dangerous.”

Witchcraft – or at least divination – was punishable by law in some states as recently as the 1970s. Zsuzsanna Budapest – featured in Denny’s book – was arrested in California, for reading tarot cards in 1975 after a woman police officer posed as a client in her shop, “Feminist Wicca”. She was found guilty of fortune telling, against the state law at the time, and, after posting bail, spent nine years appealing the conviction (Gloria Steinem contributed to her legal fees), which was reversed by the California Supreme Court on the grounds of religious freedom in 1985.

Shine Blackhawk is another of the witches featured in Denny’s book and in the gallery space at Peabody Essex. She grew up in Los Angeles and learned witchcraft from her grandmother, a woman called Carlyn The Great. When we speak she is being overlooked by a large picture of the Hindu goddess Kali, usually depicted painted blue, holding aloft a severed head. Blackhawk has two candles lit in front of her, one of them flickering through red glass. On her right forearm, is a tattoo of a winding serpent, fanged mouth open.

Her mother was from New Orleans, and her father, a devout Muslim. Both her grandmother, and her great aunt, Bettye, identified as white witches. They ran an apothecary and were highly skilled, traditional botanists. As a child, the Imam of the local mosque told Blackhawk’s father: “You’re going to have a hard time with that one.” 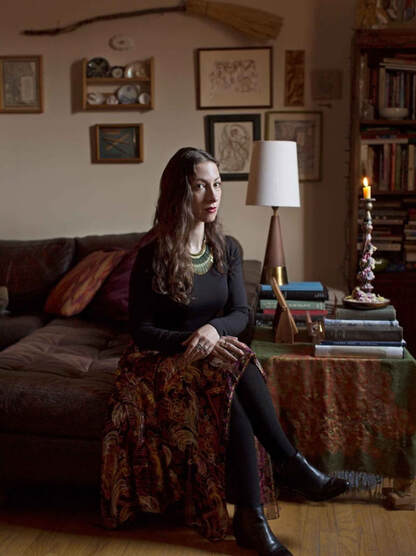 Frances F Denny. Pam, (Brooklyn, New York), 2016, from Major Arcana: Portraits of Witches in America series, archival pigment print (Courtesy of the artist and ClampArt, New York, N.Y.)
“I asked too many questions, I was always raising my hand, I knew how to recite the Adhan (the call to prayer), which is never meant to be spoken by a woman; that is shameful, that is a sin.”

In her early 20s Blackhawk came to peace with her “wild child” witchcraft, which she describes now as eclectic; part shamanism, part hoodoo but essentially a vivid form of healing. “I knew that I had this power since I was a child,” she says. “Even though I didn’t use the word ‘witch’ at that time, I just knew that I belonged to something different, another world. And I spent a lot of time in that different world.” She lost friends – mostly devout Christian and Muslim friends.

She currently lives in Phoenix, Arizona, and alongside work as an artist and musician she makes plant-based remedies for all manner of ailments. She works with the kinds of roots and herbs readily available now at Whole Foods, she says, and more acceptably packaged as “homeopathy.”

“For me, my church is in the woods, that’s my sanctuary, that’s where I feel most alive, and where I do most of my work is in nature. When you talk about spells and curses and hexes, that is how we pray.”

The basis of her work focuses almost entirely on women, healing and supporting survivors of sexual assault and rape.
​
“Everyone has a calling, and that’s mine. To work with women. I am a solitary witch. I don’t believe in hierarchy, I don’t belong to a coven. I don’t believe in following rules outside of myself.” She appears in the exhibition of Ms Denny’s portraits in Salem, she says, proud to stand alongside a group of other witches, there alongside relics from the 1692 trials.

What makes an exhibition about witches so salient now? “To have these so-called modern day witches there for all the women whose voices were stolen from them 300 years ago is one of the most important things that I’ve been a part of,” says Blackhawk. “The trials were a very gnarly part of our history, but to be interwoven and connected together: it’s as if those women are still breathing, living, dancing and moving through us. It’s epic to be a part of that.”