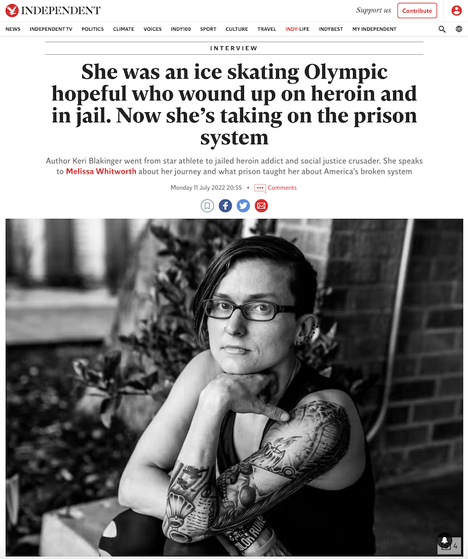 She was an ice skating Olympic hopeful who wound up on heroin and in jail. Now she’s taking on the prison system

Author Keri Blakinger went from star athlete to jailed heroin addict and social justice crusader. She speaks to Melissa Whitworth about her journey and what prison taught her about America’s broken system
If you saw a “weirdo crying behind Harvard Coop” in an alley last month, that was probably Keri Blakinger.

In June, Ms Blakinger tweeted about her return to the bookstore she “used to steal from to buy heroin 20 years ago” when she was homeless. She found that they were selling a copy of her new book, Corrections In Ink, and “panicked and bought a copy and then sobbed in the alley.”

Corrections In Ink follows Ms Blakinger’s story from Ivy League student and star athlete heading for the Olympics to heroin addict and back again, with a key part focusing on her incarceration in the early aughts. Broken and high, she was stopped by a cop in 2001 while carrying a Tupperware container of heroin which police initially valued at $150,000. Jailed for “criminal possession of a controlled substance” she served 21 months of a two-and-a-half-year sentence.

At the time of her arrest, Ms Blakinger was depressed, suicidal, and had a long history of eating disorders. She had resorted to theft, prostitution and sex work, and selling drugs to fund her addiction. In her harrowing memoir, Ms Blakinger recounts the numerous times she was raped or sexually assaulted and would disengage her brain from her body to meticulously count the stars. Though, she writes in the book, during many of her assaults, she would have had no view of the night sky.

Rarely is a memoir as raw and visceral as Ms Blakinger’s.​
“I’ve really put a lot out there,” she said in an interview with The Independent. “Enough that it sometimes makes me wonder if I would still be employable.”

One would argue that she most certainly is, for a myriad of reasons. Ms Blakinger is a talented, award-winning and sought-after investigative journalist. A reporter covering the US’s broken criminal justice system, she’s spent the last five years focused on prisons and death row. She’s visited the notorious “Walls” unit in Huntsville Texas (where since 1982, 574 people have been put to death) and was part of a Pullitzer finalist team at The Houston Chronicle 2018. In 2019, her worked helped win a National Magazine Award for The Washington Post’s coverage of women’s prisons. More recently, Jodi Kantor, one of The New York Times reporters who broke the Harvey Weinstein sexual assault story, said at a New York event for Ms Blakinger’s book that Corrections is one of the best memoirs she’s ever read.

Ms Blakinger grew up upper-middle class in the suburbs of Lancaster, Pennsylvania. Her father is a Harvard educated lawyer and her mother is a teacher who went to Cornell University. As a gifted teen, and driven student, she excelled at school, wrote for the local paper and tried all the usual sports and activities of a privileged upbringing: horse riding, piano lessons, gymnastics, soccer, Girls Scouts.

“A smorgasbord of suburbia,” she writes in her memoir.

Her ice skating career, as a pairs skater, took her to the National Championships twice. In 2001, her skating partner decided to move on and chose another athlete to compete with. To a 17-year-old, her world had seemingly imploded, she told me, her athletic career ended. Looking back, she says it was like losing a marriage and a job all at the same time.
As a result, her eating disorders became more intense. She started dabbling in drugs and her parents sent her to Harvard for summer school, which is how she ended up stealing from the campus bookstore to buy heroin.

“If I am going to decay,” she writes of this period in Corrections, “I’ll do it far away on rainy roofs and in back alleys. Like a dog crawling under the porch to die.”

The ways in which she subsequently tried to destroy herself are varied: drugs, anorexia, bulimia, and suicide attempts. Shortly after starting at Cornell University, Ms Blakinger threw herself off a bridge spanning a 100-foot-gorge in Ithaca, NY.

“The rocks in the gorge below seemed so far away, sparkling under a thin film of water,” she writes. “The birds were out, the sun was up, and it seemed like a beautiful day to die.” Unbelievably, she survived the fall with a few broken vertebrae and even more self-loathing because she had failed to end her life properly.

Ms Blakinger managed somehow to make it through almost four years of university while also addicted to heroin, mixing the two worlds, she says, like a “mad alchemist”. She was two classes away from completing her degree when she was stopped by the cop who saw her kicking the container of drugs under a parked car.

After her release from prison, Cornell allowed Ms Blakinger to finish her degree in English and she started contributing to the Ithaca Times. Her work led to reporting positions at The New York Daily News and The Houston Chronicle. She’s now based in Texas and writing for The Marshall Project, a nonprofit journalism organization focusing on criminal justice in the US. “Texas is a great place to be a reporter who covers criminal justice because everything’s so broken,” she told The Independent.

Arguably the biggest through-line of Ms Blakinger’s memoir is misogyny, which she says was not something she had specifically set out to examine.

“I knew that sexism and misogyny would be a part of it, but I didn’t realize that this book would be such an indictment of the misogyny in the American prison system until I finished it,” she says.

“One time when I was eighteen, a drug counselor told me that if I’d been raped more than once, at some point I was asking for it.”

In her memoir, Ms Blakinger recalls how a counsellor said that she was the one at fault. “That I’d been assaulted too many times to be the victim. Hers are words I still cannot forget,” she writes.

This problem is only exacerbated by the growing number of women in prisons, who are most likely to be imprisoned for nonviolent crimes like drug possession, burglary, larceny or fraud. Data from the ACLU even shows that “the vast majority of women in prison have been victims of violence prior to their incarceration including domestic violence, rape, sexual assault and child abuse.”
Ms Blakinger offers a powerful commentary on “the whole premise of prison” in one succinct passage, calling it “absurd” before adding: “Locking hundreds of traumatized and damaged women together and threatening them constantly with additional punishments is not rehabilitation. It is not corrections. It is not public safety. It is systemic failure.”

A few sentences later, she writes: “Prisons are filled with people who are troubled, not terrible - and those who are didn’t usually start that way. More than half the women in prison are survivors of physical or sexual violence and roughly three-quarters have mental health problems.

“Taking people who are broken and traumatized, further traumatizing them and then expecting them to come out better. It doesn’t work.”

Part of that trauma was, in no small part, her detoxing from heroin while in prison. Ms Blakinger told The Independent that the prison supplied her with Suboxone to help the withdrawal process, but the assistance stopped there.

“I came in on drugs, so I was high for a little bit, but then they gave me Suboxone. And I was lucky, a lot of people don’t get that. It was really kind of up to the whims of the medical folks there,” she recalled, before adding: “It would be like, some people would just get a jug of Koolaid and some Tylenol... Some people would get Suboxone and then, later, they cut that off and nobody got Suboxone. Heroin detox won’t kill you. That’s part of why it’s bad. You feel terrible. You feel like sh*t. The actual withdrawals don’t kill you.”

In a particularly distressing description of the inhumanity of solitary confinement, Ms Blakinger describes the experience as being alone in a 9-foot by 6-foot “coffin”.

“In the free world, I had liked spending time alone. Solitary is not so much being alone as it is being buried alive.

“With no sense of time or place, I quietly lost my mind to a degree that still terrifies me. I had never known my grip on reality could become so tenuous, so abruptly. I’d banged my head against the wall for a distraction and made myself throw up just to pass the hours,” she writes.

She schemed ways in which she could bang her head hard enough onto the sink in order to bleed to death or how she would tie a noose through the air vent.

“Would that be enough to kill me or was I already dead? Solitary confinement is a way of saying “You are nothing, and now you  have nothing.”​
Solitary is one of the things Ms Blakinger is asked most about regarding her during her time in prison and it is one of the things about American prisons that have been found inhumane by European courts.

In 2021, a Scottish judge blocked the extradition of an American man accused of shooting a security guard based on his concerns about US prisons: persistent understaffing, forced unpaid labor, overreliance on solitary confinement, inadequate food, sweltering temperatures and a lack of independent oversight. (Notably, Ms Blakinger broke this story and says she is surprised this issue hasn’t come up many times before.)

“I can’t speak for everyone,” says Ms Blakinger, “But most people who do well after prison do well in spite of the system, not because of it.”

For now, Ms Blakinger will continue covering the American criminal justice system from Texas. A recent story she broke is about a death row prisoner, Ramiro Gonzales, who wants to donate a kidney before he is executed on July 13. The Texas Department of Criminal Justice has said “no”.

Ms Blakinger’s colleagues and friends often worry about how long she can keep this beat up, given that it takes her back into the carceral system almost daily physically and emotionally.

​“There is a limit to how many years I can spend reliving my own trauma all the time,” she admits. “My job is dark. But on the other hand it’s why it resonates so much when I do manage to write a story that has impact, because this is impacting people who are now living in the places that I once was.”

Corrections in Ink by Keri Blakinger was released in the US on 7 June and in the UK on 7 July.