'Some people turn to God, I turned to golf' 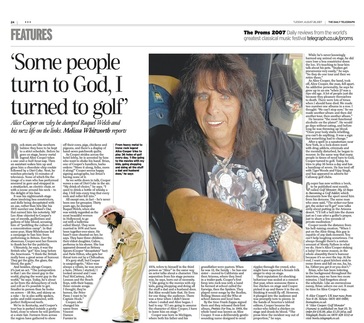 Alice Cooper on why he dumped Raquel Welch and his new life on the links. Melissa Whitworth reports

Rock stars are like newborn babies: they have to be kept to a strict schedule. Before he goes on stage, heavy-metal legend Alice Cooper takes a one-and-a-half-hour nap. Then an assistant wakes him up and gives him a chocolate-chip cookie followed by a Diet Coke. Next, he watches precisely 15 minutes of television. None of which fits the image of a man who has performed smeared in gore and strapped in a straitjacket, an electric chair, or with a noose around his neck – to the delight of his fans.

It was his nightmarish stage show involving boa constrictors, and dolls being decapitated with an axe, rather than hits like his 1972 number one School’s Out, that earned him his notoriety. MP Leo Abse objected to Cooper’s use of swords, guillotines and gallons of fake blood, accusing him of “peddling the culture of a concentration camp”. In that same year, Mary Whitehouse led a campaign to ban him from performing in Britain. Ever the showman, Cooper sent her flowers to thank her for the publicity.

Ultimately, he says, it was the British who “got” him long before the Americans. “I think the British really have a great sense of humour. They get the glitz, the glam, the blood, the guts.”

And besides, shrugs Cooper, it’s just an act. “The juxtaposition is that I am the nicest guy in the world, playing the worst guy in the world,” he says. Today, he’s about as far from the debauchery of rock and roll as it’s possible to get. Smaller in person than he looks on screen – 5ft 9in, and skinny as a rake – he is also softly spoken, polite and mild-mannered, with perfect Hollywood teeth.

We’re in Kentucky, and Cooper’s tour bus is parked outside a grotty hotel, close to where he will perform at a state fair. Farmers from across the region have gathered to show off their cows, pigs, chickens and pigeons, and there’s a display of hand-sewn patchwork quilts.

As Cooper strides across the hotel lobby, he is accosted by fans who want to shake his hand. Brian, one of Cooper’s handlers, barks orders: “Move it along, folks, move it along!” Cooper seems happy signing autographs, but Brian’s having none of it.

As we settle down to talk, Cooper waves a can of Diet Coke in the air. “My drink of choice,” he says. “I used to drink a bottle of whisky a day. I fell into every trap that every rock and roller fell into.”

All except one, in fact – he’s never been one for groupies. Thirty years ago, he dumped Raquel Welch, when she was widely regarded as the most beautiful woman in Hollywood, to go out with a ballerina called Sheryl. They were married in 1976 and have been together ever since. He hasn’t once cheated on her, he says. They have three children; their eldest daughter, Calico, performs in his shows. She has appeared dressed as Britney Spears (Cooper “decapitates” her) and Paris Hilton, who gets her throat torn out by a Chihuahua.

It’s gory stuff, but Cooper is unapologetic, “Alice was always a villain, he was never a hero. [When I started,] I looked around and I saw Paul McCartney, John Lennon and the Beach Boys, with their happy, three-minute songs. I thought, they’re heroes, the Peter Pans; I want to be Captain Hook.”

Cooper, who changed his name from Vincent Damon Furnier in 1974, refers to himself in the third person as “Alice” in the same way an actor talks about a character. This separation from his stage persona was, he says, born out of necessity. “I like going to the movies with my kids, going shopping and doing all the stuff a dad and a husband does. But Alice would hate that. He lives for one thing: the audience. There was a time when I didn’t know where I ended and Alice began. I had to say: ‘If I am going to assume the character of Alice Cooper, I have to leave him on stage.’ ”

Cooper was born in Michigan, where both his father and his
grandfather were pastors. When he was 12, the family – he has one sister – moved to California and then Arizona, where they lived in a trailer park. Cooper’s first foray into rock was with a band he formed at school called the Earwigs, then the Spiders. They played cover songs by the Beatles, Rolling Stones and the Who at school dances and local bars.

By the time Frank Zappa signed them and they released their first album, Pretties For You, in 1969, the whole band was known as Alice Cooper. It was a deliberately gentle- sounding name designed to send ripples through the crowd, who might have expected a female folk singer to step on stage.

Their reputation for shocking behaviour was sealed at a concert that year, when someone threw a live chicken on stage and Cooper picked it up and threw it in the air, thinking it would fly off. However, it plunged into the audience and was promptly torn to pieces. In the hands of America’s tabloid editors, Cooper became the rocker who killed a chicken on stage and drank its blood. “The press blew the incident way out of proportion,” he says.

While he’s never knowingly harmed any animal on stage, he did once lose a boa constrictor down the loo. It’s touching to hear him talk about his pets. “Snakes get pneumonia very easily,” he says. “So they do one tour and then we retire them.”

As Alice Cooper, the band, took off, Alice Cooper, the man, fell apart. An addictive personality, he says he grew up in an era “when 27 was a ripe old age. A lot of people just die because they pleasure themselves to death. There were lots of times when I should have died. We made two number one albums in a row. I thought: ‘We can’t stop now.’ So we made another album and then did another tour, then another album.”

He became “the most functional alcoholic on the planet”. He would go days without eating, and before long he was throwing up blood. “Once your body starts rebelling, you can’t do anything. It was a sign that something had to change.”

After a spell in a sanatorium near New York, in a lock-down ward with drug addicts, criminals and the mentally disturbed, he began to recover. In the same way that many people in times of need turn to God, Cooper turned to golf. Today, he tries to play 36 holes a day and has a handicap of seven. He has teed off with Tiger Woods and Vijay Singh, and has appeared in adverts for Callaway golf clubs.

Cooper has now written a book, to be published next month, called Golf Monster: My 12 Steps to Becoming a Golf Addict, which documents how the sport saved him from his demons. The same man who once said, “The sicker our fans get, the sicker we’ll get” now talks airily about putting in the Arizona desert. “I’ll loft a ball into the dunes just so I can utter a golfer’s prayer, just to share a few seconds of private meditation.”

Cooper needs the distance from his hell-raising creation. “When I put on the Alice thing, this guy is capable of any dark moment. You can’t help laughing sometimes. I’ve always thought there’s a certain amount of Monty Python in what we do. Here’s Alice Cooper staking a baby! For some reason, in the whole absurdity there’s humour because it’s so over the top. At the end, I want a giant kitchen sink to come down and fall on me, ha, ha, ha. Either you get it or you don’t.”

Brian, who has been loitering in the background throughout the interview, says we have two more minutes. I had forgotten about the schedule. Like an overzealous nanny, Brian ushers me out. It must be time for Alice Cooper’s nap.