Annie Leibovitz is a Woman of the Year because... "There are certain things that are considered milestones in Hollywood. And one of them is being photographed by Annie Leibovitz." - actress Cameron Diaz
Download PDF 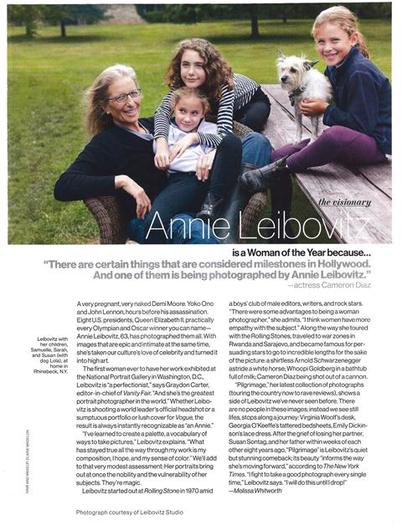 A very pregnant, very naked Demi Moore. Yoko Ono and John Lennon, hours before his assassination. Eight U.S. presidents, Queen Elizabeth II, practically every Olympian and Oscar winner you can name—Annie Leibovitz, 63, has photographed them all. With images that are epic and intimate at the same time, she’s taken our culture’s love of celebrity and turned it into high art.

The first woman ever to have her work exhibited at the National Portrait Gallery in Washington, D.C., Leibovitz is “a perfectionist,” says Graydon Carter, editor-in-chief of Vanity Fair. “And she’s the greatest portrait photographer in the world.” Whether Leibovitz is shooting a world leader’s official headshot or a sumptuous portfolio or lush cover for Vogue, the result is always instantly recognizable as “an Annie.”

“I’ve learned to create a palette, a vocabulary of ways to take pictures,” Leibovitz explains. “What has stayed true all the way through my work is my composition, I hope, and my sense of color.” We’ll add to that very modest assessment: Her portraits bring out at once the nobility and the vulnerability of her subjects. They’re magic.

Leibovitz started out at Rolling Stone in 1970 amid a boys’ club of male editors, writers, and rock stars. “There were some advantages to being a woman photographer,” she admits. “I think women have more empathy with the subject.” Along the way she toured with the Rolling Stones, traveled to war zones in Rwanda and Sarajevo, and became famous for persuading stars to go to incredible lengths for the sake of the picture: a shirtless Arnold Schwarzenegger astride a white horse; Whoopi Goldberg in a bathtub full of milk; Cameron Diaz being shot out of a cannon.

“Pilgrimage,” her latest collection of photographs (touring the country now to rave reviews), shows a side of Leibovitz we’ve never seen before. There are no people in these images; instead we see still lifes, stops along a journey: Virginia Woolf’s desk, Georgia O’Keeffe’s tattered bedsheets, Emily Dickinson’s lace dress. After the grief of losing her partner, Susan Sontag, and her father within weeks of each other eight years ago, “Pilgrimage” is Leibovitz’s quiet but stunning comeback; its beauty “informs the way she’s moving forward,” according to The New York Times. “I fight to take a good photograph every single time,” Leibovitz says. “I will do this until I drop.